Yesterday I came to Yumeiho Center which is located in Okachimachi in the middle of Ameyoko, in Tokyo, Japan.
I hadn't been here for eight months, last time I met Maciej Dlusky, a great teacher and friend from Poland. Yesterday I met a teacher from Mongolia, he came here to get his fourth Yumeiho grade, he was here for a week and diligently practiced in order to get his exam right. His technique is great. His name, impossible to spell is Myagmarsuren Dashnyam, he has a clinic in Ulan Bator where he works and teaches with other 8 Yumeiho therapists. 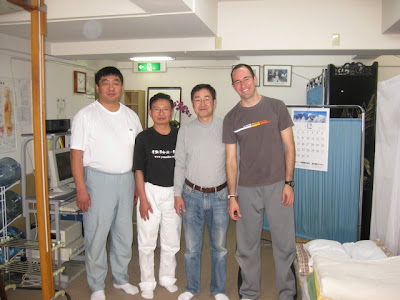 (From left to right: the teachers Myagmarsuren, Watanabe, Shigeru and me)
I remembered how my teacher made so many efforts in order to propagate Yumeiho around the world, and now, 30 years later, thanks to him, I can really experience the internationality of Yumeiho.
Publicado por Adrián García en 1:35 4 comentarios:

Here's an extract of the Hipbone Yumeiho Therapy book, written by Saionji Masayuki, creator of Yumeiho, where he explains the origins of this Therapy:

"My teacher, Shuichi Ohno, attracted by the Chinese martial art of Chuan Fa, went to China at the age of 16. He learned the Reposition Therapy which was part of the martial art during his stay that lasted until World War II ended in 1945. He studied a variety of therapies after returning home, establishing a therapy of his own by combining basics of the Reposition Therapy with merits of the therapies he had learnt". 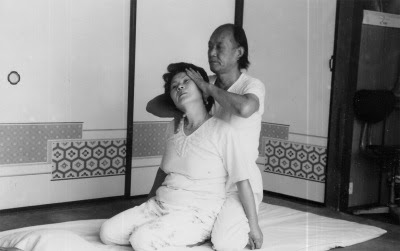 "Through his writings, I came to know Mr. Ohno, and engrossed myself in learning the marvelous achievements made by his therapy. It is not exaggeration to say I devoted my whole youth to studying the therapy.
Then, I worked out a new therapeutic system comprising 100 different patterns of therapy, and named it the 'Hipbone Yumeiho Therapy' with the consent of my teacher”.
Publicado por Adrián García en 4:26 No hay comentarios:

Here is a Yumeiho video that my teacher did around 20 years ago. It explains the basic Yumeiho theory. As it is in japanese, I will explain it with steady shots from the video.
So first of all, the video:


Now the explanation:
The video starts with three kanji (symbols used to express ideas in japanese language): 肝心要. As a whole word it means important, crucial. As separated words, the first one is used to refer to the liver 肝臓, the second one to the heart 心臓, and the third one to the pelvis 腰. So, for the body, these three parts are very crucial, according to the video.
Ant then it focuses on the pelvis kanji: 腰, comparing it to a fan. The pivot of the fan holds all the pieces together, that is his importance. "Thanks to the pivot, the fan can show it's beauty".
It then makes an analogy to the human pelvis, as it works as a pivot for the whole body. 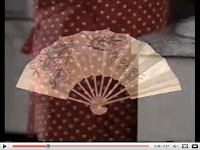 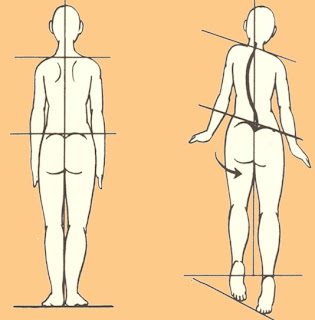 Then it shows a couple of images, the first one is a normal person, with the axis of the body making an angle of 90 degrees with the pelvis line (no displacement). But if there's a displacement in the pelvis then the one leg will look shorter than the other, one of the shoulders will be higher, and the column will be curved. 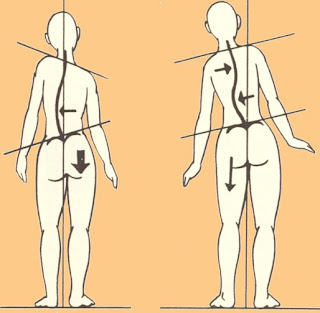 After showing how to measure a pelvic tilt, it then shows a couple of images of the same person with left pelvic displacement. The first one, because of the pelvic misalignment, is supporting more body-weight on the right leg (the 'longer one') than on the left. If this pelvic displacement remains untreated, then the body weight will shift to the other leg, hence curving even more the spine. 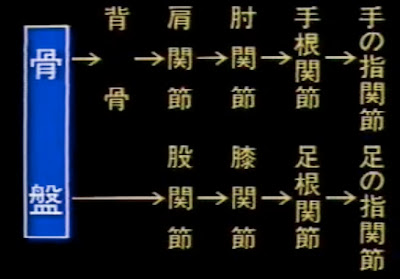 Yumeiho is a massage therapy which one of it's primarily objectives is to give back it's symmetry to the body.
Many of us are aware of the length difference of our legs. It is very rare to find someone with both legs with the same longitude. This difference comes from a mispositioned pelvis in it's sacroiliac joint.
When the legs haven't the same size, the body weight isn't equally distributed on both legs. That is, for example, if somebody is 60 kilograms, we would think that the body weight is equally distributed: 30 kilograms on the left, and 30 on the right leg. But surprisingly that is not the case most of the times. Our body weight is unequally distributed, resulting in imbalances not only in the lower part of the body, but also in the pelvis, spine, back, torso neck, arms, etc.
Those imbalances can cause pain, and sooner or later that pain may lead to more serious problems in the body.
Yumeiho consist of diverse massage techniques, osteoarticular readjustments and manipulations, all of them intended to re balance the body.
Publicado por Adrián García en 20:54 No hay comentarios: 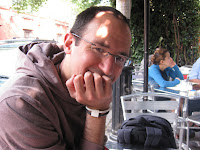 I already have a blog, is written in Spanish so that´s why I am trying to start a new one in English.
As English is not my mother tongue, I might have some mistakes, so forgive me, dear reader, if my English is not good enough. I will do my best to improve it.
This blog is about YUMEIHO THERAPY, a massage technique I learned 8 years ago from his creator, Saionji Mayasuki. Little by little I will be translating previous articles from my other blog or creating new ones in order to explain, what is Yumeiho, what is for, his history and so on.
So here we go with this new blog!
Feel free to comment anytime!
Adrian
Publicado por Adrián García en 22:57 8 comentarios: